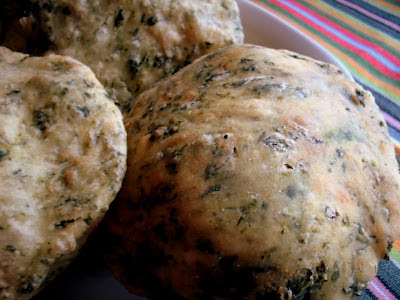 Last evening we had hosted a dinner party, but this time, I decided to steer away from the usual Gujarati fare and went with a "Punjabi-Mughlai" theme. On the menu were these delectable Methi bhature, Chhole, Baingan Bharta, Vegetable Biryani, Bhajiyas,and for dessert -Sevai made in Milk.

These Methi Bhatures have become a favorite with my family and I do make it when I have access to Methi..which is quite rare. I have also used the dry Kasturi methi on occasion for a slightly tangier taste.

You will need:In a bowl, combine the instant pizza dough mix, methi leaves and the salt. Slowly add the yogurt and bind into a dough. Add a little water if necessary. Its better to make the dough with yogurt, I have found. It will be much easier to roll later on. Cover with a damp towel and let it rise for at least a couple of hours. I made the dough at 10:00 in the morning, and made the bhatures around 6:00pm, and they turned out extremely nice.
When ready to make the bhaturas, roll into small circles and deep fry. If you'd rather not deep fry, pan fry these like a paratha, using very little oil, they still taste great. Serve hot with any curries..... 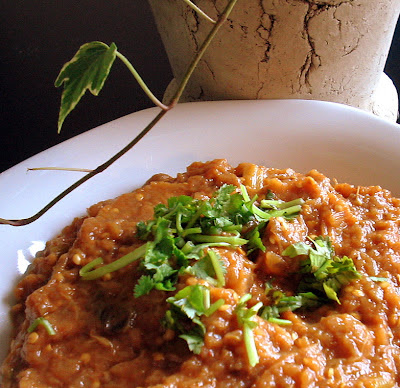 The other item on my list was Baingan Bhartha made with a little bit of yogurt instead of cream, and I used a little bit of my favorite herb- Rosemary for a unique flavor.

You will need:
Peel the eggplants, give them a rinse, chop them into large pieces and cook them in the pressure cooker till mushy. In a large pan, heat the oil, add the cumin seeds and the Cilantro-Ginger-Chili paste. Cook until lightly browned. Add the Onions, both the spring onions and the red. Add tomatoes and the rosemary snips and cook until the oil separates. Add the mashed eggplant at this point and stir really well. Add the seasonings, paprika and the yogurt. Cook further until you reach the desired consistency. Garnish with Cilantro and serve hot.

This Baingan Bhartha is also going to Sangeeta - this month's gracious host for JFI- Eggplant.

trupti, i don't like eggplant cooked the indian way, but this version i'm willing to try. maybe you'll convert me.

Trupti,this is what you been doing yesterday!! Methi Bhature looks great.more like spicy Pizza!Great idea.Bhaingan of course is my fav veggies,I will surely try your's.I have to get some Eggplants first.Thanks for these darling.
Now relax and enjoy the leftovers if any left!;D

do u still have any of these things left???? i would gladly self-invite to ur home;)

That's a neat idea for Bhaturas and it's good that we can pan-fry them as well.
Love the Baingan Bartha - have never tried it with yogurt though.

Thats a great combo...... I eat only baingan bharta when it comes to eggplant ...... anything else with eggplant is a no no. :)

ohhhh that looks so good. methi bhature is very nice and new to me. the look of the bharta is yummy.

OMG!!!
Trupti,baigan bharta looks so yummy,feel like tasting it from the snap:))

I like your bhatura version with the pizza dough, quick and easy right, and when you have lot of guests over thats the way to go

Methi bhature?! Even the name sounds delicious! Thanks for the great idea!

Trupti,methi bhature look so good.Got some fresh methi yesterday so in time for trying this one!:)

Love those bhaturas! they would taste so good with chai! no need for anything else yaar! sned some over.

Trupti, Methi bature look really good!!! I had once made methi puris and they turned out really good.... I can imagine how good this one would have been!!! Thanx

I am bowled. Bhatura with pizza dough.. Wow, thats easy entertaining.. And bharta with rosemary.. Gotta try that.. I like experimenting with herbs too..

Your Baingan Bharta looks so yummy! Just yesterday I made bharta, so next time I get an eggplant, I am going to try out your recipe. And making bhature wit methi with pizza dough...such a neat idea!!! loved it!

the pictures make me feel hungry...innovative idea of making bhature

Love the color of the Baingan Bharta. Need no extra enticements, love eggplants.

Hey trupthi,
These methi batura and curry looks so mouthwatering.hmm too good.Love the pics of curry a lot.

Cooking newbie here. What does it mean when you say "cook eggplant in the pressure cooker?" Can you please detail the steps?

No water? Just large eggplant pieces and cook? How long?

Trupti your dinner menu was very nice. This combo is too good. I am already feeling hungry though it is just 10 am :)

Methi bhature? Never tried that! You have a lovely spread there. I make bharta roasting the baingan ( well thats punjabi style like my MIL says) and we don't use any yoghurt or cream in it either. On second thoughts some cream in it may make me like bharta!!:)

Trupti... this is the only way I'll eat bharta... the pressure cooked way :-) Am trying this... we bought a big baingan just a day ago... and you put this. Telepathy working overtime or what???

Trupti, you're busy in the kitchen again! Methi bhatures must smell so good coming from the oven. The eggplant sounds almost like a warm raita -- looks fantastic! BTW the photos at Jugalbandi were fantastic, too :)

How could you not invite me over? I know we had the English breakfast tea just the other day but I would visit again :)

Peel eggplant, rinse, cut into pieces and add just enough water to create steam and pressure cook until the regulator 'hisses' 3 times....that should do it. Drain the water and Mash the eggplant when cooled and use in the recipe.

Thanks Trupti. :) Much appreciated.

Wow Trupti,
How could I miss such a beautiful post with mouthwatering dishes. Loved both of them. Methi bhatura sounds mouthwatering and the baingan bharta is my all time fav. I loved the way you presented baingan bharta. Lovely color and crystal clear image.

Ra8fDE Your blog is great. Articles is interesting!

yHBseZ Please write anything else!

Hi! Came upon this blog while searching for Baingan recipes. Can you actually peel a baingan? I've always charred the skin on fire and then peeled it. Could you pl. tell me how best to peel baingan? Thanks, Sharmila

Sharmila,
I've always used a carrot peeler to peel the eggplants. It works just fine. Good luck and thanks for visiting!

Ayurvedic and Health Sites of Interest: 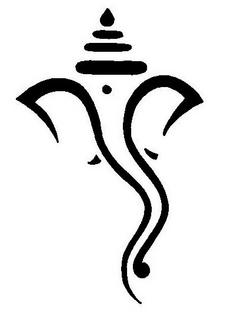